Born in 1949, she changed her name in 1963 to "Sigourney", after the character "Sigourney Howard" in F. Scott Fitzgerald's "The Great Gatsby" (her
own birth name, Susan, was in honor of her mother's best friend,
explorer Susan Pretzlik).

“I’ve just heard the most amazing thing,” she whispered. “How long were we in there?”

“Why, about an hour.” “It was — simply amazing,” she repeated abstractedly. “But I swore I wouldn’t tell it and here I am tantalizing you.” She yawned gracefully in my face: “Please come and see me. . . . Phone book . . . Under the name of Mrs. Sigourney Howard . . . My aunt . . .” She was hurrying off as she talked — her brown hand waved a jaunty salute as she melted into her party at the door.''
Posted by DANIELBLOOM at 6:36 AM No comments: Links to this post

''Government and Politics in Taiwan'' is an essential text for any
course on freewheeling Taiwanese politics, Communist Chinese Party
politics of brainwashing and mind control (sic),
and will be useful to students worldwide, especially those in Beijing
and Shanhai mystified at Taiwan's success in the modern world.
The has a November 6 pub date and is available now for pre-ordering.
The tome has already garnerned some
very good reviews, with Robert Ash of the Taiwan Studies Program at
the University of London, noting: "Fell’s [book] offers an accessible,
authoritative and comprehensive
interpretation of Taiwan’s political development through the period of
authoritarian rule [during Martial Law days] to the establishment of a
fully-fledged democratic
system of governance [under the modern KMT and DPP parties]."

Shelley Rigger, a political science professor at Davidson College in
the USA, could not hold back
her enthousiam, noting: "Fell’s new book is ....brimming with
enthusiasm for its subject and affection for its readers, ....Thanks to [his]
.....heartfelt engagement with
his topic, readers will gain both a comprehensive knowledge of a vast
scholarly literature and a gut-level appreciation for Taiwan’s lively
political scene.'


NOTE: Dafydd Fell is a British scholar from an island nation who focuses on Taiwan studies from his base in London. He often visits the island nation on the other side of the world, too.
Posted by DANIELBLOOM at 6:34 AM No comments: Links to this post 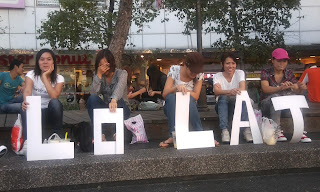 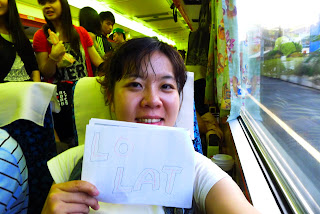 Posted by DANIELBLOOM at 9:13 PM No comments: Links to this post

Victor Mair writes from the USA: [Photo by Rain Kuo] [[''Hired Actor'' Posing as local mandarin]]
Here is a sign directing passengers in a new Chiayi (Jiayi, in southwestern Taiwan) building that links a bus terminal with a railroad terminal:

I would translate this as "connecting bridge."  So how did the makers of this sign came up with "engagement bridge"?

xiánjiē 銜接 usually means "connect; converge; link (up); join" and in some cases "hook (up)" or "articulate".

But xiánjiē 銜接 also has the specialized medical meaning of "engage(ment)", as in "the phase of parturition in which the fetal head passes into the cavity of the true pelvis" (from the American Heritage Dictionary).  Online Chinese dictionaries render this sense as 【医】衔接, i.e.,【Med.】xiánjiē 銜接.  Perhaps the software chose this sense because of the ordering precedence of "【" (before the beginning of the alphabet).  In any event, it was unfortunate that the person(s) responsible for making this sign chose the most specialized and least appropriate of all senses of xiánjiē 銜接, resulting in "Engagement Bridge", which will surely be baffling for speakers of English (for whom the sign is intended, after all).  They will probably think it signifies a bridge where people go to propose marriage!

But cf. the fourth definition of the entry for xiánjiē 衔接 in iciba (which is the web interface for Jinshan/Kingsoft Ciba). Since Jinshan/Kingsoft Ciba is so widely used and was the source of what is undoubtedly the most colossal series of mistranslations in the annals of Chinglish, it is plausible that it is also culpable in this case –

Google Translate renders xiánjiē qiáo 銜接橋 as "convergence bridge", which would be just as puzzling for English speakers as "engagement bridge".

Curiously, there's a "Go Between Bridge" in Brisbane. This is suitably translated into Chinese as jiēlián qiáo 接連橋, which is another (more common than xiánjiē qiáo 銜接橋) term for "connecting bridge".

"Go Between Bridge" is unidiomatic in American English, unless it were referring to a place where matchmakers ply their trade.  Speakers of Australian English can tell us whether it is idiomatic for them when they want to refer to what we call a "connecting bridge".

Incidentally, architects refer to such structures as "building to building pedestrian bridges". More colloquially, such a bridge may be styled a "skyway," "catwalk," "sky bridge," or "skywalk".

[With a tip of the hat to Brendan O'Kane, Rebecca Fu, Joel Martinsen, Cyndy Ning, and Leinad Moolb, who sent me the photograph that was snapped on a cellphone camera by Miss Rain Kuo from Taichung. Nad said that in the future he hopes local officials putting up English signs in Chiayi and other parts of Taiwan would first check with some Western born native speakers to make sure they are correct.] 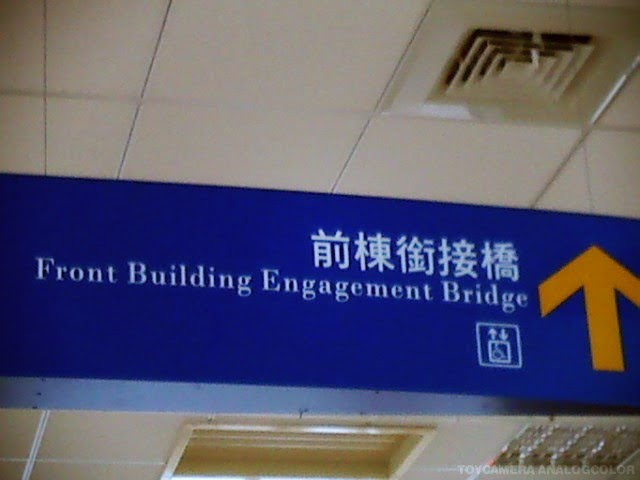 Posted by DANIELBLOOM at 6:47 AM No comments: Links to this post

Suicide and Public Awareness of Depression (How media report suicides, pro and con)

Recently, a middle-aged man committed suciide while on a business trip outside his country. He was married, had two lovely children, a lovely wife, a great job, was well-liked by all his co-workers worldwide and loved by all his many friends. Naturally, after the newspaper in Australia reported his death, in a small newspaper story of just two paragraphs, stating that the deceased -- let's call him Harvey Nettleton -- had jumped from the roof of a five-star hotel in Sydney where he was staying during a week-long business trip. Meanwhile, his frends and family back in his home country, Canada, were completely taken aback by the news of this suicide, which seemed to come out of nowhere! Everyone who knew Harvey said he was the life of the party, a good family man, a loving husband, a doting father, a great co-worker, a fantastic colleague, and nobody had a clue as to why he decided that fateful night, after midnight, around 1 am, to jump from the roof, climbing over a security fence and plumeting to his death.. The initirial news story did not say anything
about his slitting his wrists beforehand, but a later news story from the police sources in Sydney, said that Harvey's hotel room had blood on the bed sheets and a knife was found and no suicide note was found, and that the police concluded that he had slit his wrists,, taken the elevator to the top floor, walked up to the roof via a staircase, jumped  over the safety fence, and POOF, he's dead. 51 years old! AND NOBODY HAD A CLUE?

When I first heard this news via  a blog, I also was curious: what caused the impulsve to commit suidice and why the was media so sloppy and lazy at first in reprting the FACTS. My feeling is that if the man committed suicide due to midlife clinical depression, the media should discuss this just like we discuss cancer and Parkinson's disease and other brain aneurysms now. But because suicide does not haev a name, like HARVEY'S DISEASE we might call it, peoplle in the media are loathe to mention the S word. Or to even
tell readers what migth have been the cause. I mean, something causes cancer, right? So something causes suicide. Shouldn't we be courageous to discuss this now. AND IF WE TALK ABOUT THIS OPENLY IN THE NEWSPAPERS AND WEBSITES OF THE WORLD, MAYBE THIS HELP PREVENT FUTURE SUICIDES FROM TAKING PLACE SINCE PEOPLE WHO SUFFER FROM DEPRESSION CAN BE ABLE TO TALK ABOUT THEIR DISEASE WITHOUT BEING AFRAID TO MENTION IT. THAT IS my MO here.

Here is the news story:

A Canadian man was found dead in a pool of blood on the sidewalk
outside a five-star hotel in Sydney yesterday, police said.

An initial investigation found that Harvey Nettleton, 51, had jumped to
his death from the top floor of the 12-story hotel building before
dawn, police in Sydney said.

An ambulance was sent to the scene soon after the Sydney Fire
Department was informed of the incident, but the man was pronounced
dead, apparently from a fractured skull.

The police have informed the Canadiab Enbassy in
Sydney of the incident.

Police said the man arrived in Sydney on a business visa last Friday
and was scheduled to leave on Monday.

The police said hotel monitors showed that he left his room at
1:18am and took the elevator to the ground floor.

At 2:07am, he took the elevator alone to the 10th floor, from where he
walked up to the 12th floor and jumped off the building.

His body has been taken to the Sydney Funeral Parlor
on Oxford Street, police said.

No sooner had I posted this blog post than I received a polite cease and desist notice from a lawyer in Canada who told me to stop talking about this incident in public. The lawyer wrote to me:

Please be advised that I am the general counsel to Harvey's firm, the employer of the late Harvey Nettleton. I have received copy of published statements from you which appear to provide various speculation as to the cause and manner of death of Mr. Nettleton. This correspondence provides what could be construed as libelous and unsubstantiated statements harmful to the reputation of Mr. Nettleton, his family and the firm he worked for. You are hereby requested to cease and desist from any further activity. I am happy to discuss our position and perspective with you should you be so inclined. [If you are not the person who wrote said internet publications, please disregard and delete this email.]

TO which i replied:

THanks for note. I fully understand and I apologize......In no way,
was i trying to cause harm or hurt anyone. I had just
gone online via social media such as twitter to ask friends of his worldwide if they knew
of any other reasons he might have done what he did,
and since i live in Sydney and read the papers here, i just wanted to
let people know NEW FACTS that had emerged
but only IF they wanted to hear the gtrisly news.......i did not force
this on anyone, i assure you sir i am a sensitive person
who cares about human life and his family too......SO YES, I WILL STOP
RIGHT NOW AND NOT POST ANYTHING ANYMORE
about this...and please accept my apologies....My intent was to help
people UNDERSTAND what happened, but since
my online behavior was not so good or constructive, i will STOP NOW...

thanks for your understanding

i see your point

NOW MY QUESTION TO MENTAL HEALTH WORKERS AND FAMILY COUNSELLORS AND CLERGY AND NEWSPAPER REPORTERS AND EDITORS WORLDWIDE is this:

SHould we discuss the reasons people commit suicide openly in public and in newspaper stories, or should we keep the entire THING secretive and in the closet of human conciousness? What is your POV, dear readers?
Posted by DANIELBLOOM at 7:39 PM No comments: Links to this post